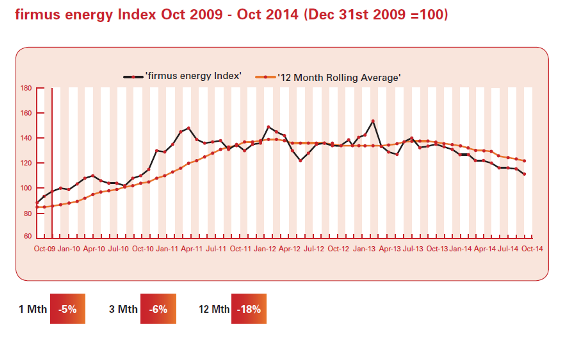 Increases in the wholesale prices of natural gas, coal and electricity insufficient to offset a fall in global oil prices.

After moving sideways for a couple of months, the wholesale cost of energy lurched downwards by six per cent in October. The firmus energy Index #feIndex which monitors a basket of key prices in Northern Ireland dropped to 108, its lowest point in just over four years. The index was dragged down by a fall in the cost of oil. The charge for a barrel has fallen by 25% since June as a glut on global markets forced several big producers to cut asking prices. The combination of weak demand and surplus oil has led some commentators to talk of a new era of softer prices in global oil markets.

‘’Lending backing to this analysis are reports that at least two producers have been prepared to accept less for their output in order to maintain market share. Saudi Aramco, the Saudi Arabian national oil company, is said to have continued to cut its charges right into early November in a bid, it’s thought, to fend off the threat from a tide of US shale oil.’’

Lower temperatures prompted a rise in gas consumption last month as consumers switched on the central heating. Prices nudged gently upwards by 4% to 50 pence a therm though still leaving them at their lowest level for any October since 2010. While high stocks and relative mild weather are mainly responsible for the subdued picture, a deal, brokered by Brussels, which led to the restarting of gas supplies from Russia to Ukraine played a reassuring role. There had been fears that a continuing stand off between the two feuding countries could have disrupted the piping of gas through Ukraine to Western Europe. In the middle of the month the dollar price of coal eased to a near five year low before it reverted near to September’s figure. The cost in sterling was marginally up because of the stronger greenback. Again it was milder than usual weather that kept a lid on coal costs. Over supply in the European market also played a part. Lower than expected prices did not discomfit Russian exporters whose returns were healthy when converted into a weak rouble.

If September was calm as far as the weather was concerned, October marked a return to more normal turbulence. Over the month wind farms supplied a fifth of the island’s electricity needs. By displacing the more expensive of Ireland’s power stations, wind held back the cost of wholesale electricity. Prices went low enough on some days to force typical gas powered plants to rely on so called capacity payments to rescue them from running at a loss. In fact it was only because of these payments, which reward plants for being available to generate, that wholesale electricity prices marginally rose instead of falling. What happens next in global energy markets depends on the interplay of forces at the next meeting of OPEC later this month. Some countries will be tempted to cut production to defend market share. Other producers will need to maximise revenue to make the budget books balance. But there is another factor which could trump these issues. Weak oil prices are more of a threat to light, tight oil producers than they are to Middle East countries with their low production costs. The latter may be content to let prices drift much lower to leave their competitors sink in a sea of cheap oil.

John French from firmus energy concludes:
‘’The Chief Economist of the International Energy Authority has warned this current period of low oil prices will not last. Fatih Birol says the cost of oil will to have rise to trigger the extra production needed to meet future demand.’’