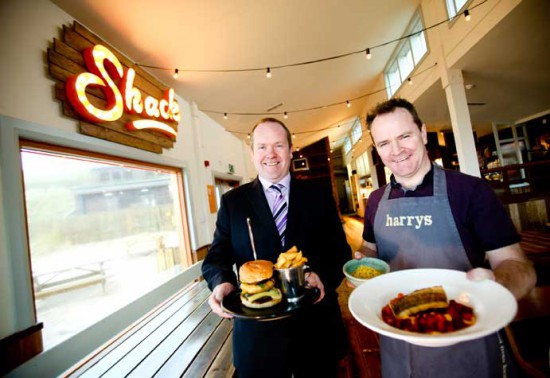 Located in the unique setting of the famous golden sands of Portstewart Strand, Harry’s Shack, is already ‘creating waves’ with customers, having just converted its premises to natural gas, supplied by firmus energy.

The Shack, which has recently  been named ‘Ireland's Restaurant of the Year’ by McKenna's food guide after only a few months in operation, is the epitome in modern dining with a retro ‘50s’ beach hut twist. It employs around ten people in the winter months, opening from Wednesday to Sunday for brunch, lunch and dinner and approximately 30 during the peak summer season, when it opens seven days a week.  Owner and manager, Donal Doherty, explains:  “We have created a welcoming dining destination in a truly spectacular location where customers can come in from the beach and watch the waves crash to the shore as they enjoy first-class, fresh, local food.

“This atmospheric building was the National Trust information point for visitors to the beach and was always known locally as ‘the shack’.  When the National Trust decided to alter the purpose of the building to turn it into an eatery, they approached us as they were aware of our outlet, Harry’s in Bridgend, which has a strong emphasis on local sourcing and supporting producers and growers.

“They wanted a similar model put in place in Portstewart which would be bright, airy and appropriate for a beach setting.  With our food expertise and links to local growers and producers we were able to work with them to create something quite special with a fresh-as-can-be menu to match.  In fact, we believe we are the only restaurant in the area that actually goes to the fishermen and purchases the fish and shellfish straight from the boat, getting it to customers’ plates in record time!”

He added: “We totally gutted out and renovated the Shack and our architect suggested that we could perhaps secure a connection to the natural gas supply, so we approached firmus energy. They worked to sort out the connection logistics, which were a bit different to the norm since we are right on the beach!  They found a solution that meant the pipes were laid when we were a bit quieter after the summer rush and once this infrastructure was in place, the switchover itself was done within 24 hours!

“Natural gas is the way forward for businesses; it makes common sense to connect if you can as the low-cost and practical nature of the fuel is very appealing.  We were previously using LPG and the switch to natural gas could save us up to 40% on this basic utility.  Replacing the bottled gas is something of the past too which is much more convenient as the natural gas is available, 24/7.

“We were hit hard by the bad storms in Portstewart in December, which was unfortunate.  However, the benefit of using natural gas became apparent as the cooking equipment, heating and hot water are all operated by the energy supply, which remained uninterrupted, so we were able to open just two days later.”

Harry’s Shack is fully accessible for all customers and parking is available close by and throughout the town. Kevin Flanagan for firmus energy comments:  “Harry’s Shack is like nowhere else I can think of in Northern Ireland. It really is a top class restaurant serving the freshest seafood and produce right on the beach, perfect for a casual drop in or as a planned destination for great food.

“This was a more challenging connection proposition, logistically, but our contractors worked hard to lay the pipes off-season to connect Harry’s Shack with as little disruption to homes and businesses in and around the area.

“Natural gas is an economical choice for companies. It is a particularly good match for businesses which carry out an element of cooking on the premises due to allowing a more controllable temperature setting. There are also practical benefits such as instant hot water and environmental advantages, including reduced carbon emissions.”

If you would like to switch your business to natural gas, enter your postcode into our postcode checker, or alternatively contact us via our freephone telephone number: 0800 032 4567