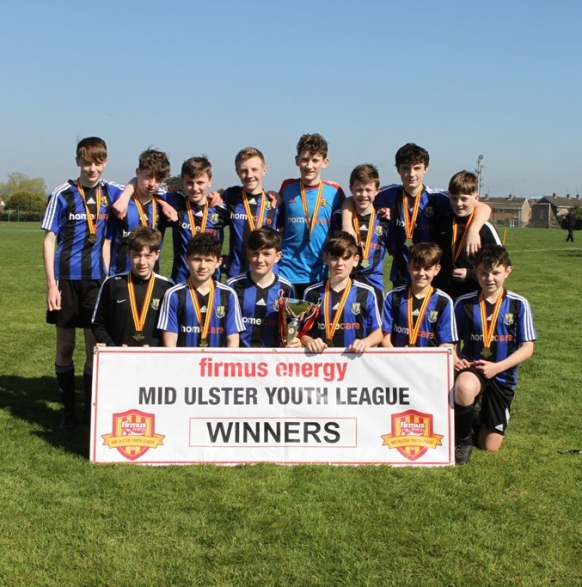 Armagh City are celebrating a double win at the recent firmus energy Mid Ulster Youth League Knock-out Cup which took place at Lurgan Town Arena, with both the U11 and U14 teams crowned champions of their respective age categories.

Armagh City are celebrating a double win at the recent firmus energy Mid Ulster Youth League Knock-out Cup which took place at Lurgan Town Arena, with both the U11 and U14 teams crowned champions of their respective age categories.

The Armagh City U11s beat Glenavon 6-1 and the U14s beat the Magherafelt Sky Blues 3-2 in the finals with Armagh City U17s losing 3-0 in their final to Cookstown Youth. In the other categories, Mountjoy Utd Juniors U13 team beat Lurgan Celtic 5-2; Annalong Rovers U15s won 3-0 against Oxford Sunnyside and Dungannon Youth were successful in the U16 final against Ardstraw, winning 3-2.

One of the organisers of the event, Michael O’Kane, said: “Congratulations to all the winners, and of course the runners-up, who all played with guts and determination.

“The Knock-out Cup finals had an absolutely fantastic turn out and it was great to see so many young people actively involved in football. It was a glorious, bright day and the young people taking part did the sport proud - whether they won or lost, they gave their all and an excellent level of sportsmanship shone through at each match.

“I would like to thank everyone who gave up their time on the day to make the event such a success as well as our League sponsors firmus energy, who have been very proactive and hands-on all season.”

Ryan O’Neill from firmus energy said: “Congratulations to all those who took part and put on such a magnificent show for all the spectators and created a thrilling and often nail-biting competition.

“It was a very enjoyable day and we are delighted to support the firmus energy Mid Ulster Youth League, which works to get the very best from each young player. One of firmus energy’s main core values is teamwork and it is wonderful to see the players embodying this value at each and every match.”

firmus energy supplies natural gas to 30 villages, towns and cities across Northern Ireland. These customers now enjoy the convenience of a constant supply of hot water and instant heat – perfect after coming in from a rainy, muddy day on the pitch or a cold afternoon cheering on the teams on the sideline!

To see if you can connect to natural gas from firmus energy, click here.