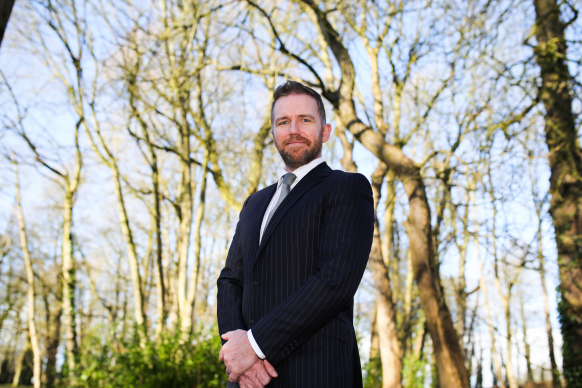 firmus energys Director of Engineering and Sustainability Eric Cosgrove explained to the NI Chamber of commerce our hopes and aims for the future .

Eric is confident that by utilising Biomethane from anaerobic digesters and eventually hydrogen will help decarbonise transport and heat, improve the environmental credentials of local agri-food and manufacturing businesses and provide an environmentally friendly heating solution to homes and businesses connected to the network now and in the future.

Having invested over £220 million since 2005, firmus energy has constructed and maintains over 1,800km of new underground polyethylene (PE) pipe in its network area, connecting more than 50,000 customers across 35 cities, towns and villages stretching from Warrenpoint to Derry/Londonderry.

Supplying gas to over 105,000 customers in all of the natural gas networks in Northern Ireland, it employs more than 120 staff and sustains over 300 indirect roles through contractors in construction, installation and other support services.

Sustainability is a strategic priority within firmus energy. It is built into the companies Purpose, Mission and Vision. To embed that in the culture of the organisation, it is the only UK utility to put all its staff through City & Guilds Energy Efficiency training in the belief that it puts them in a better position to give advice and guidance to its customers to reduce their bills and help alleviate fuel poverty.

This culture of sustainability has also been recognised by Business in the Community which awarded it an Environmental Benchmarking Gold Standard.

Eric explains, “having recently taken on the expanded role of being responsible for driving the company’s sustainability agenda, we have a three-point plan to decarbonise heat by 2050.

“In the first instance between now and 2030 the priority is to maximise connections on the existing natural gas network and delivering on our planned network growth to ensure as many customers as possible have an opportunity to move away from home heating oil and realise an immediate CO2 reduction*.

“By the end of next year 320,000 out of the total 550,000 connectable properties in all of the natural gas network areas in Northern Ireland will have converted from oil to natural gas. If we can expedite conversions for the remaining 230,000 properties which are already connectable that will provide a total carbon reduction saving of 1.7million tonnes of CO2 each year.

“The natural gas network is a ready-made decarbonisation solution”

“The second stage will then be to introduce indigenous renewable gases into the network to assist the transition away from fossil fuels.

“Because the natural gas network in Northern Ireland has been constructed using polyethylene (PE) pipes since the commencement of operations in 2005 we are uniquely placed to accept other gases without having to make any significant changes to upgrade our network.

“Our sizeable agri-foods industry also presents a further opportunity to utilize agriculture, retail and hospitality waste in anaerobic digestion to produce biomethane. Generating renewable gas locally will have a range of benefits for the environment and our customers.”

“In addition to injecting Biomethane into the natural gas network to heat homes, businesses and generate electricity, the byproduct of the process can be used as bio fertilizer and applied onto fields, closing the loop on a circular economy to help decarbonize industries and reduce the need for farms to buy in additional nutrients to grow crops.

“Providing a sustainable energy supply which is clean and affordable will be critical to sustaining jobs and industry in Northern Ireland and prevent jobs in manufacturing and food production being relocated elsewhere.

“Our sustainability team are involved in a number of projects which are taking forward the potential to inject hydrogen into the network produced from untapped renewable sources such as wind and solar.

“Northern Ireland can become a leader in hydrogen technology, and we could eventually have a natural gas network which carries 100% hydrogen – removing carbon from the network entirely.

“This makes the natural gas network a ready-made decarbonization solution and although the molecular make-up of the gas flowing through the network will change, it will still perform the same function for customers, with the added benefit of being an even cleaner and more environmentally friendly product.

“Generating renewable gas locally will have a range of benefits for the environment and our customers.”

“Stage three of the company’s plan to assist the transition to net zero carbon will be to continue maximising connections and network growth and increasing the percentage of renewable gas utilised on the network.

“We have been engaging with the stakeholders on the future Energy Strategy to ensure the full potential of the local natural gas network can be realised for the benefit of consumers, businesses and the environment.

“Politicians are also in the process of developing the first local climate change targets to contribute to the overall UK commitment to achieve net zero by 2050, so any environmental advantage we can offer will play a key role in delivering that.

“The Northern Ireland Executive is committed to decarbonising transport, but battery technology isn’t suited to HGV, buses and other heavy vehicles.  Natural gas provides the solution in this transport sector whereby compressed natural gas (CNG) can be utilised via refuelling stations to assist the transition away from petrol and diesel.”

firmus energy is leading by example and is collaborating with Granville Eco Park in Dungannon to install a compressed natural gas refuelling facility at its head office so it can start using gas powered vans for its engineers.

There are further investment plans to build over 350km of pipeline and connect over 12,000 additional customers in areas which have already been passed by firmus energy’s network. With an estimated spend in excess of £30m in the next two years firmus energy is on target to have connected 108,000 customers in the its network areas by 2028.